Step away from the keyboard

Step away from the keyboard

Every year my family and a group of our friends take a trip to Yosemite.

It’s always fun. We hang out with our kids, hike to waterfalls, bike ride through the valley, and raft down the river. At night, we roast s’mores around the campfire.

We were there last weekend and once again, it was unforgettable. 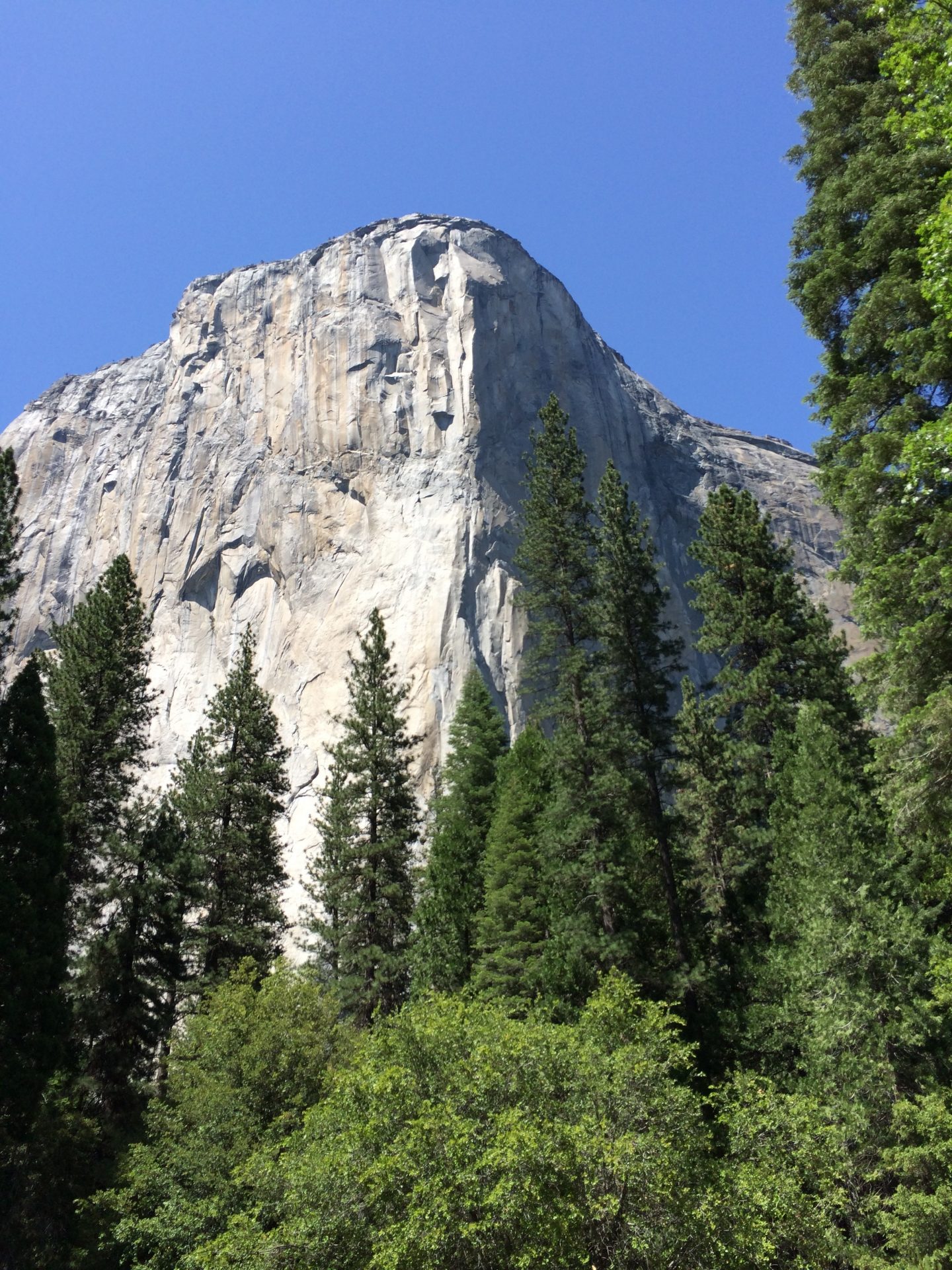 I’ll be honest… I was kind of a wreck at the time. I was leaving for New York the following Monday for Book Expo America (BEA), my very first author event. I was incredibly excited, but also nervous. I had to give a speech at my publisher’s dinner. What if I totally bombed? I was doing my very first book signing. What if no one showed up? Advance copies of Time Between Us would be out in the big world for the first time. Would people like my story? What if they didn’t?

All this insecurity was also coming from a place of utter exhaustion. I’d spent the last few months writing the first draft of Time After Time, and to be honest, it wasn’t going well. My brain needed a break, but instead I sat at my keyboard day after day, trying to make this story flow out of me like the first one had, and growing more and more discouraged because it just… wasn’t.

Writing wasn’t fun. I hate it when that happens. 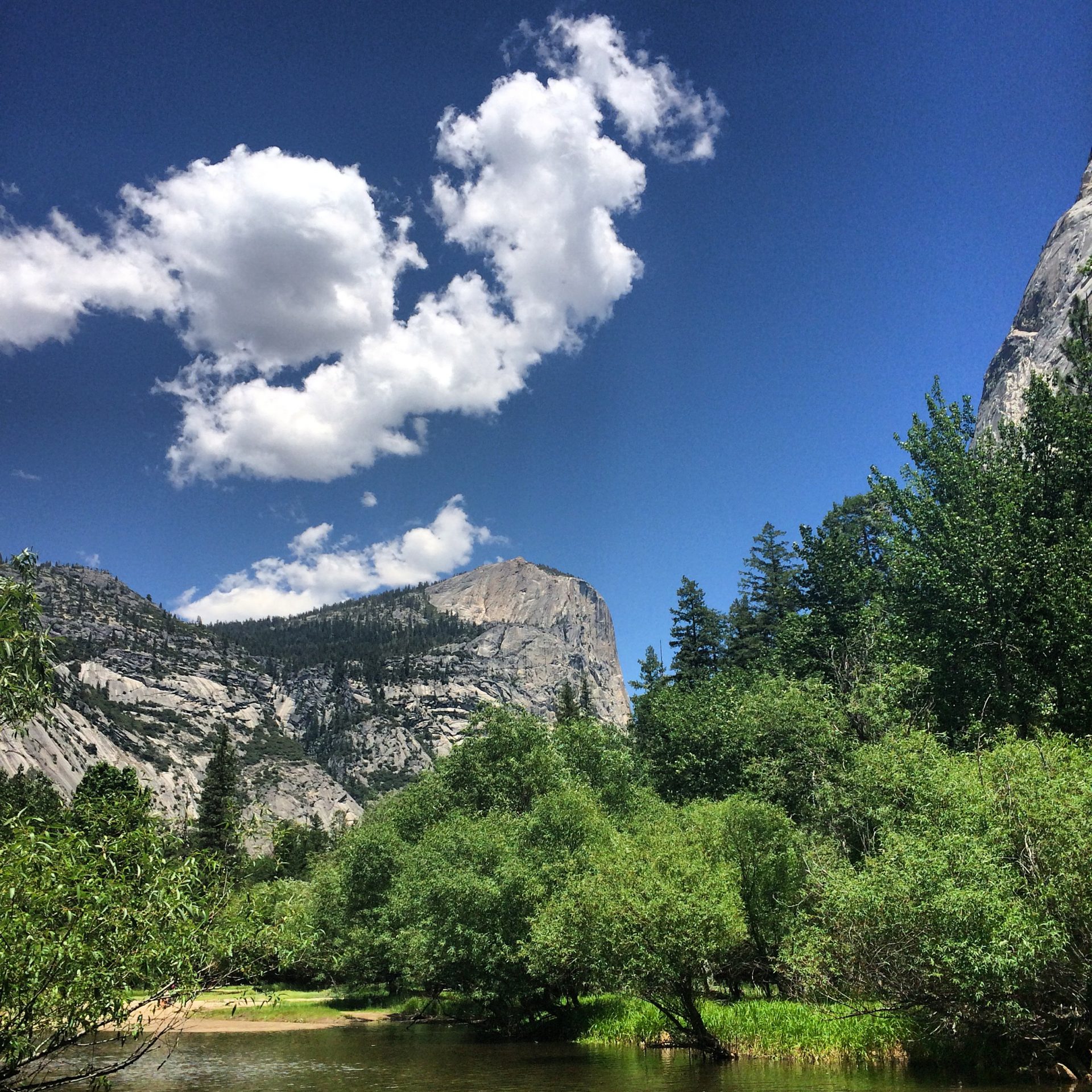 I reluctantly told my husband to take the kids and go to Yosemite without me. I needed to write. I needed a quiet house. He said he understood.

But a few days later, he changed his mind.

He sat me down and very kindly said, “Tam, you’re making a mistake. You don’t need to write. You need to not write.”

He reminded me that my family hadn’t seen me much and they missed me. That reminder alone would have been enough for me to join them, but he went on to say this: “You’re writing a story from the perspective of a 17-year-old rock climber. You need inspiration. Where better than Yosemite?” Then he said something brilliant like, “Trust me, you’re not going to find Bennett in that keyboard.” 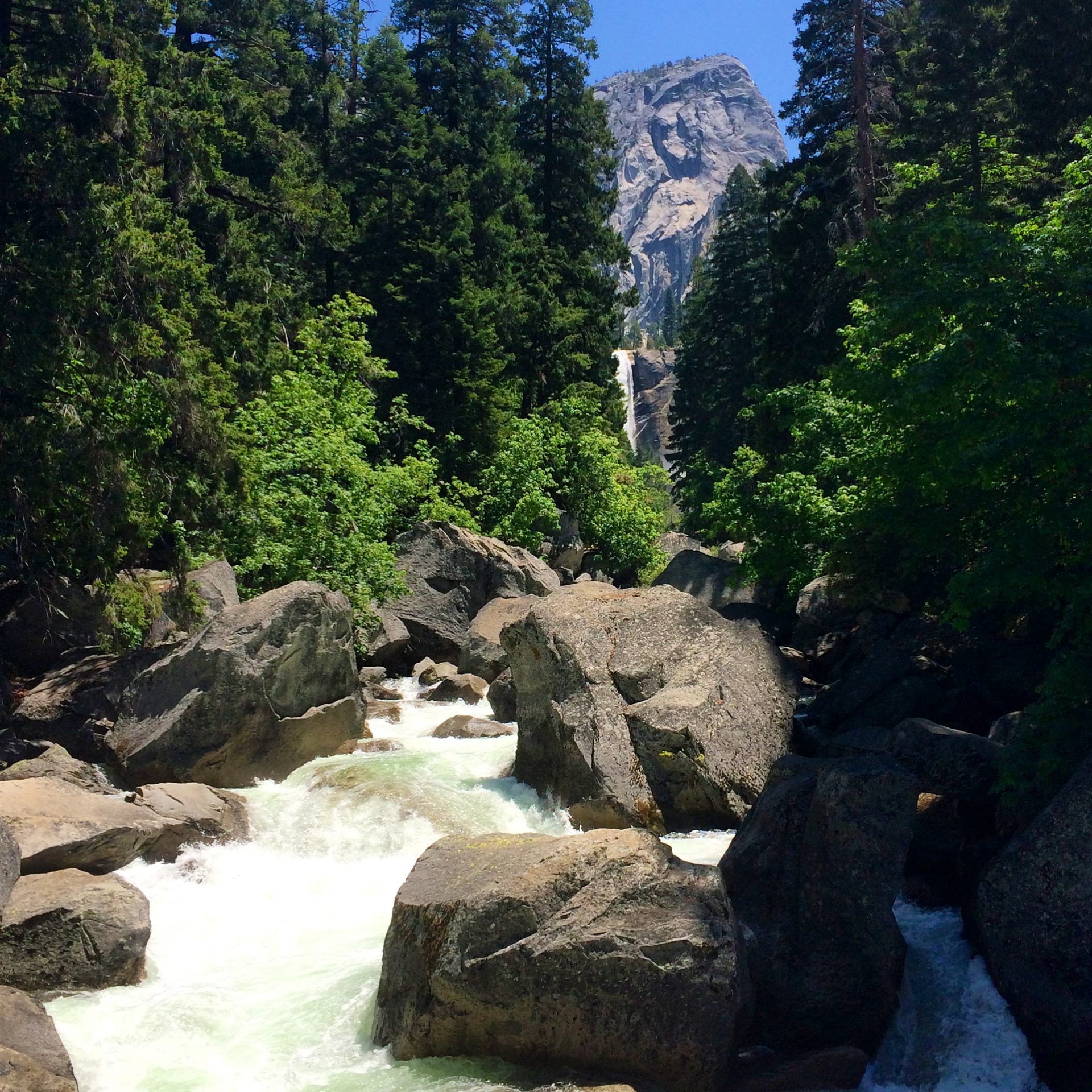 He was so right. I addition to being surrounded by the people I love, I spent that weekend surrounded by huge slabs of granite and waterfalls and boulders — the kind of natural beauty Bennett would use his teleportation talents to see over and over again.

And over the course of the weekend, I saw “Bennett” everywhere, especially when I wasn’t looking for him. All these small moments meant nothing to anyone but me, but each one made its way into Time After Time.

I spotted a teenage guy (he even had dark, shaggy hair) teaching a group of friends how to rock climb at the base of Yosemite Falls. One of the other guys in that group looked nice, so he became Bennett’s best friend, Sam. 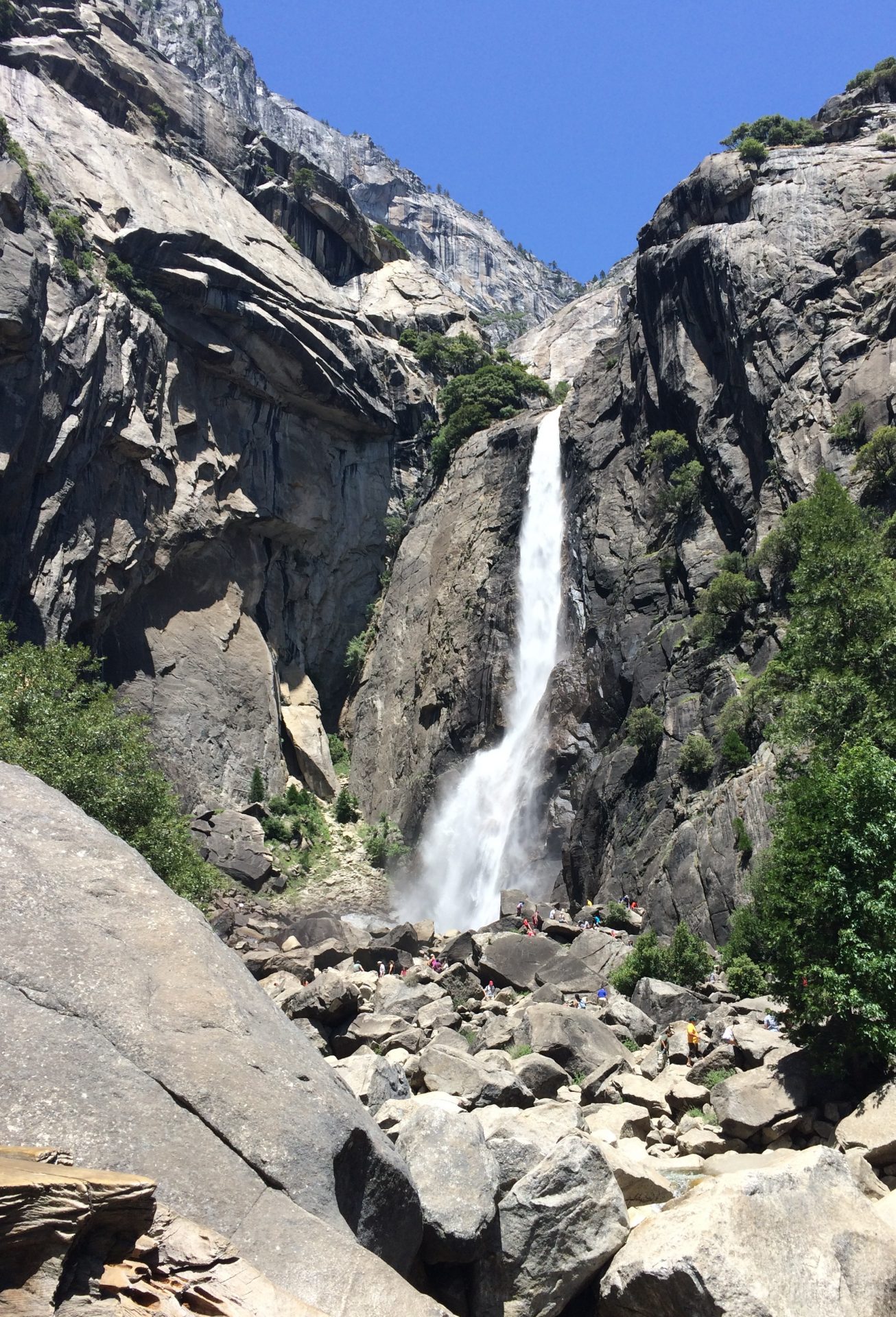 I saw a countless number of Jeeps. I already knew Bennett would drive a Jeep Wrangler in present day, but those sightings solidified it.

One of the teens in our group plays acoustic guitar. While we were sitting around the campfire one night, he started playing “Rope” by Foo Fighters. It’s one of my favorite songs, but I heard the lyrics differently that night. It went right on Bennett’s playlist.

As we were making the long, nearly vertical hike to Vernal Falls, one of my friends turned to me and said, “This is where we need your Bennett. He could just zap us to the top of the waterfall.” I quickly replied, “Bennett would never do that. That would be cheating. You’ve got to earn that view.” 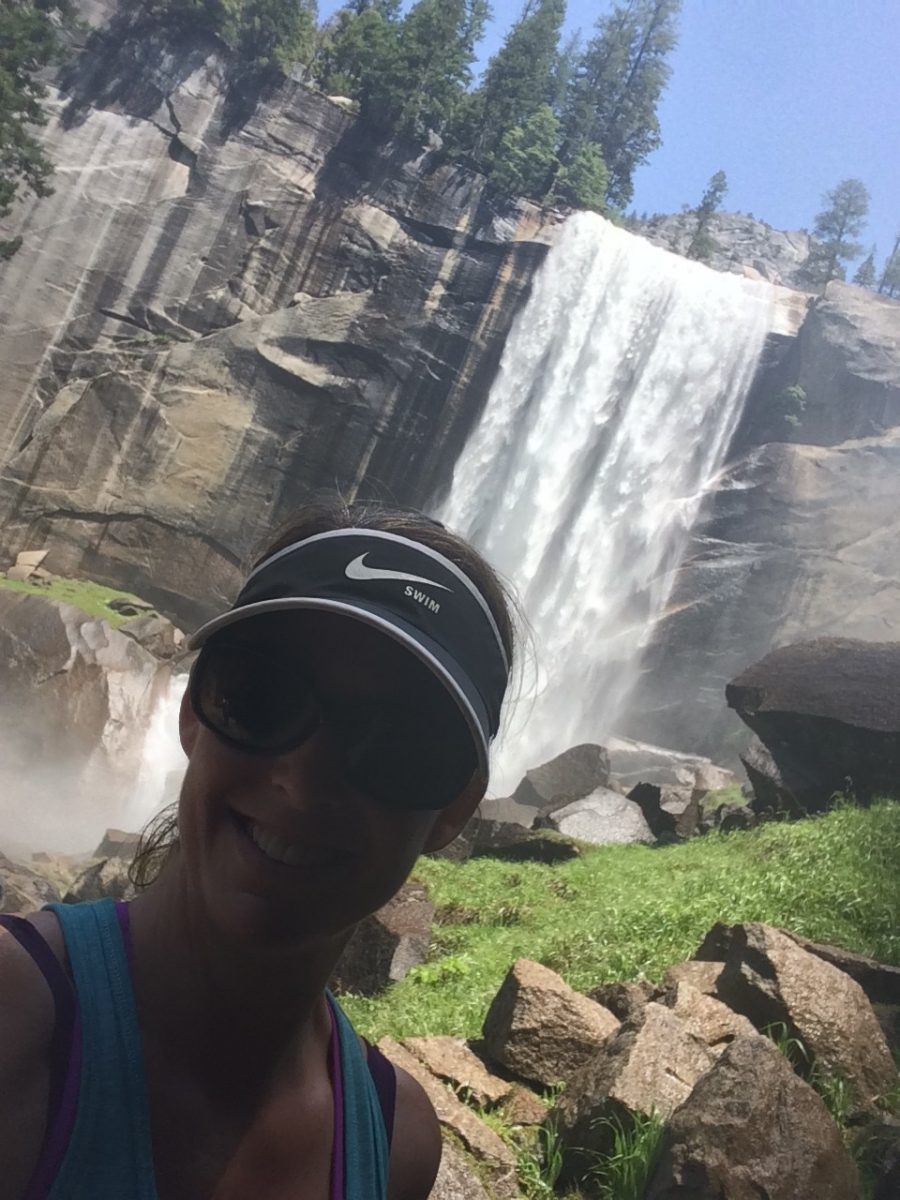 Me, earning my view.

It occurred to me that Bennett would feel the same way about climbing the steps to the top of the Eiffel Tower (and that Anna would want the “zap”). That little comment made its way into the story: 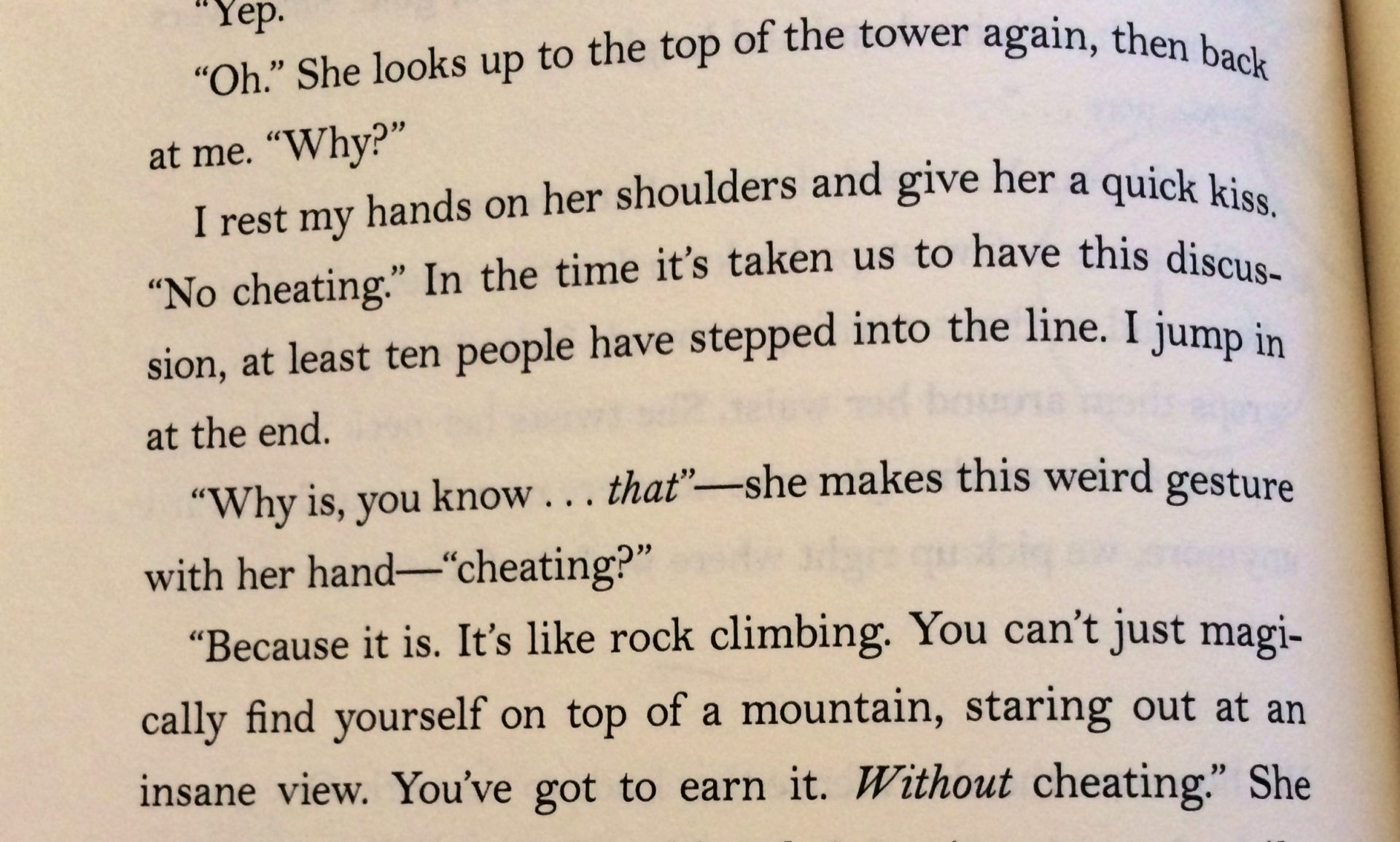 One night a bunch of my girlfriends and I were sitting on a bridge, watching the sunset. My friend Jen and her husband had just returned from France. “This reminds me of the lock bridge in Paris,” she said.

I didn’t know about the lock bridge, so she told me all about how she and her husband hung their “love lock” on the Pont Des Arts and threw the key into the River Seine. I’d already started writing scenes of Anna and Bennett in Paris together, and now there was a lock bridge too?**  More inspiration! 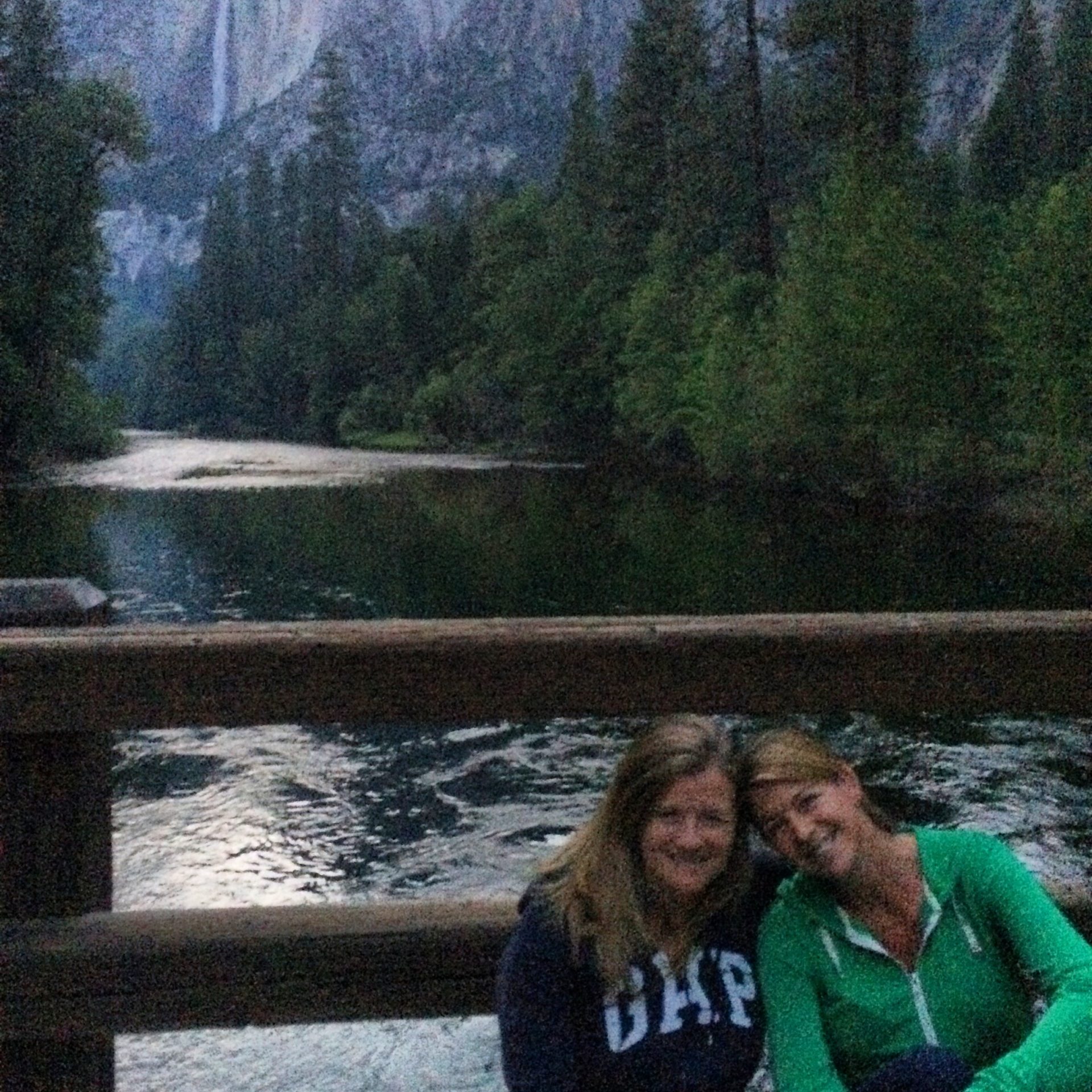 I’ll never miss this annual Yosemite trip. Now, when I’m there, I try not to write it all. I just experience it, take in the scenery, and thank my mountain muses.

Of course, when I wasn’t looking for inspiration, it found me again on that same trip the following year.

One of the women in our group was curious about my choice of beach reading (I’ve become a big fan of Psychology Today). I explained that I’m an author doing research for a book I’m working on about a teen with OCD. “Oh, how interesting,” she said. “I’m a therapist. One of my clients is a 16-year-old girl with OCD.”

I’ve interviewed a number of mental health professionals for this project, but our casual conversation that afternoon was especially enlightening. We talked at length about OCD and teens, and the unique nature of the therapist-patient relationship, which is a big part of EVERY LAST WORD (and incredibly important to me to get right in the story.)  I came home truly inspired, and excited to incorporate some new ideas into those chapters.

Sometimes, we need someone to remind us to step away from the keyboard.

We writers work so hard, and often, when the ideas aren’t flowing, we tell ourselves we just need to work harder. If we just type more, if we just keep pushing through, eventually we’ll feel inspired again and the story will come more naturally. We. Must. Keep. Writing.

That isn’t always true for me. I need conversations with real people. I need to climb to the top of the tall waterfall and look down on the valley and see how the world looks from up there. I need to step away from the story.

I found Bennett on that trip, and after that, everything changed. That doesn’t mean I didn’t get stuck again — I definitely did. But when that happened, I printed out those pictures of Yosemite and taped them to to my office wall. Then I went for a long walk.

** Side note: That conversation about the lock bridge not only brought Anna and Bennett to Paris, it also brought me to Pont Des Arts the following year. Very soon, I’ll tell you all about this: 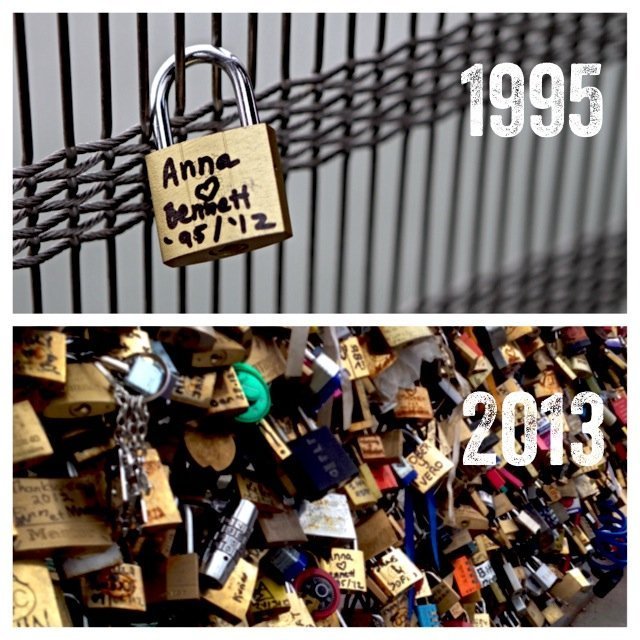 How about you? Where do you go for inspiration?

Subscribe to my newsletter to receive exclusive updates, freebies, giveaways & promos delivered directly to your inbox! Plus you’ll be automatically entered for a chance to WIN a signed copy of one of my books in my quarterly giveaway!
By Tamara Ireland Stone|2017-06-04T11:35:49-07:00June 12th, 2014|Categories: Travel, Writing|Tags: Writing, Yosemite, Relaxation|1 Comment