Happy 8th everyone! We’re only TWO months away from the release of Time After Time and I couldn’t be more excited!

That also means that we’re up to pick #5 in the Time After Time Blog Hop, a musical countdown to release day.

You can read all about the playlist blog hop, but here’s the gist: Twice each month — from June through October — a bunch of amazing, music-loving bloggers are sharing one new song from Anna & Bennett’s playlists. Bennett’s songs are revealed on the 8th, Anna’s on the 22nd. On release date, I’ll unveil both playlists in their entirety on the Time Between Us website.

June 8: Jessica at Jessica Love Reads, Writes, Rocks kicked things off with this song from one of our favorite bands. This one’s from Bennett’s playlist. Get the full story here.

Katie in Monterey, CA and Angie in Portland, OR won signed hardcovers and audio editions of Time Between Us. Congratulations!

June 22: Jen at A Book and a Latte unveiled the first song from Anna’s playlist — one both of us have always loved. She thought it was the perfect Anna song (I couldn’t agree more). Learn more from Jen right here.

July 8: Jessica at Just a Book Lover picked a song I listened to non-stop as I wrote Time After Time. I think it sums up Bennett’s state of mind quite  perfectly. Read more of Jessica’s thoughts on the song here.

July 22: Alice, Lauren, and Renee at Alice Marvels picked an epic song from an epic 90’s band, The Smashing Pumpkins. The album version below is great, but the four of us are partial to this stripped down, acoustic version. Get the scoop from Alice and the gang here.

Jesselle won a pre-approved link to the advance copy of Time After Time (thanks Hyperion!) and Shelver506 won a Time Between Us audiobook. Congrats, you two!

And NOW… It’s time for another amazing YA book blogger to reveal the next song on Bennett’s playlist! I’m ridiculously excited about today’s pick and the person who’s sharing it.

CLICK HERE to find out the song, and then come back so I can tell you more about Stacee!

I first met Stacee from Too Fond of Books on Twitter. She read Time Between Us very early on — months prior to the book’s release — and we chatted a few times online. She had such nice things to say about the story (and, ahem, Bennett).

Then she mentioned that she might be driving up to San Francisco for my launch party. From San Diego.

Guys, California’s one state and all, but that’s a long, long drive. Seriously, I didn’t think she’d do it. I mean, I brought along a TBU mug and a few other nice gifts in case she actually did show up but… Did I mention that it’s a long drive? Go ahead. Google it.

The launch party was nothing short of amazing and I got to meet a bunch of readers in person for the first time. But then Stacee got the front of the line and told me who she was, and I was totally blown away. We hugged too much and talked too long and I gave her too many gifts and apparently my mom had to point out the other people waiting in line so we’d stop gabbing.

Stacee was one of the first people to read Time After Time when it became available on NetGalley. She blew through it in a few hours and was the very first reader to tell me what she thought about it. Suffice it to say, her words made me smile.

I was so happy to get the chance to talk with her last weekend at the Society of Children’s Book Writers and Illustrators (SCBWI) in L.A. We chatted about books we loved and writing and… yep, Bennett. 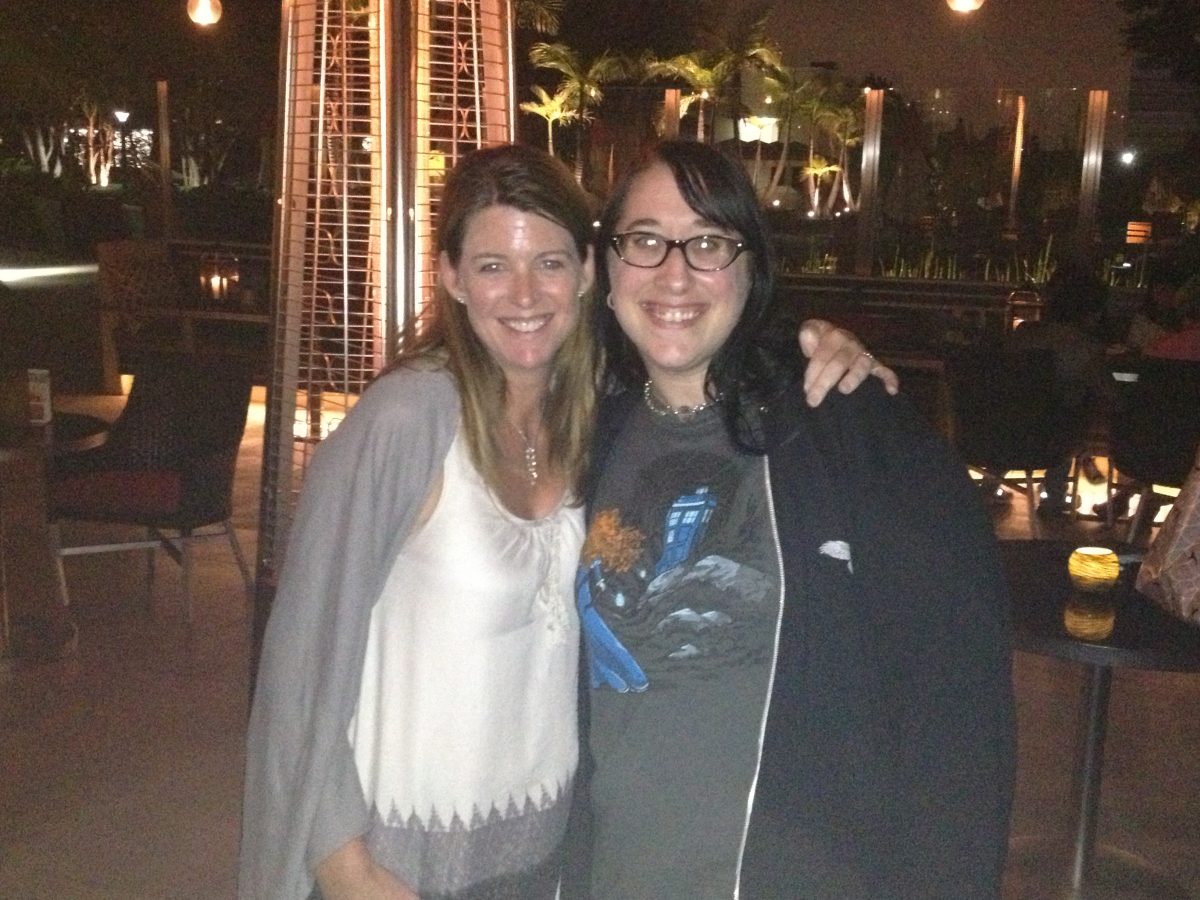 I could go on and on, but I’ll just say THANK YOU, Stacee. I appreciate all your kind words about me and my stories, and all you do to spread the word about the books you love. I’m one of many lucky authors. Thanks for going out of your way to get to know me. I’m so glad we’re friends.

We hope you’ll keep playing along with us!

Subscribe to my newsletter to receive exclusive updates, freebies, giveaways & promos delivered directly to your inbox! Plus you’ll be automatically entered for a chance to WIN a signed copy of one of my books in my quarterly giveaway!
By Tamara Ireland Stone|2019-02-05T09:52:20-08:00August 8th, 2013|Categories: Music, Giveaways, International|Tags: Playlist, Young Adult Fiction, Books, Reading, Music, Silversun Pickups, The Smashing Pumpkins, Alanis Morissette, Three Doors Down, The Lumineers|4 Comments